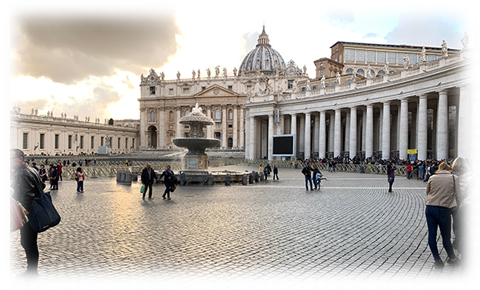 Read the full announcement from the Vatican about the special Urbi et Orbi blessing on Fri., March 27 at 1 p.m. EDT

REPLAY of Pope Francis, live from St. Peter's Square in Rome for prayer and the Urbi et Orbi blessing on Fri., March 27 at 1 p.m.

“All those who spiritually join this moment of prayer through the media will be granted a plenary indulgence according to the conditions provided for in the recent decree of the Apostolic Penitentiary,” Holy See Press Office Director Matteo Bruni told journalists following the pope’s announcement.

Plenary indulgences, which remit all temporal punishment due to sin, must be accompanied by full detachment from sin. They may be received for oneself or offered for another.

People must also fulfill the ordinary conditions of an indulgence, which are:

Since it is not possible to fulfill of all of these conditions due to pandemic restrictions, those seeking the indulgence must have the will to satisfy the conditions as soon as possible for them.

For those unable to receive the blessing, the Vatican’s Apostolic Penitentiary has granted a plenary indulgence for anyone who prays for an end to the pandemic, healing for the sick, and the eternal repose of the dead. A person may offer at least a half hour of adoration before the Blessed Sacrament or a half hour of prayer with Scripture, or the recitation of the rosary or chaplet of divine mercy “to implore from the Almighty God an end to the epidemic, relief for those who are suffering, and eternal salvation of those whom the Lord has called to himself.”

Pope Francis has asked people to pray for the lonely, the elderly, doctors, nurses, healthcare workers, government authorities and the police. The pope also stressed the importance of praying for the dead during his Sunday morning Mass livestreamed from his residence in Vatican City.