Diocese advocates for Down syndrome legislation 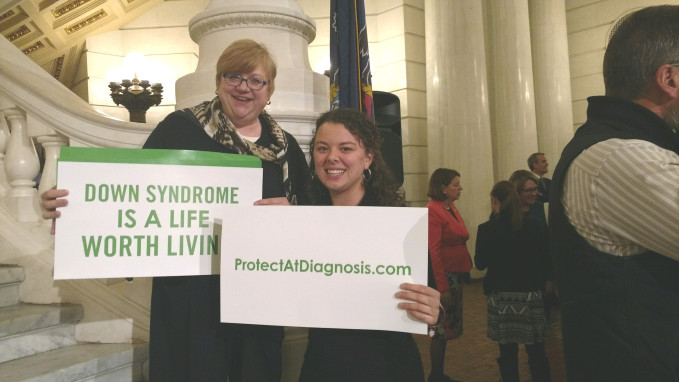 Michele Inter, left, director of Disabilities Ministries for the Diocese of Erie, and Patrice Swick, director of the Office of Social Justice and Life, attended the March 12 Harrisburg rally.

HARRISBURG—The Office of Social Justice and Life and the Office of Disabilities Ministries of the Diocese of Erie—along with the Pennsylvania Catholic Conference—urge Catholics to advocate for proposed legislation that prohibits the abortion of any child solely due to a diagnosis of Down syndrome.

Under current law, a woman can obtain an abortion prior to 24 weeks gestational age for any reason if a physician deems it necessary, except if the woman’s sole reason is to select the sex of the child.

House Bill 2050 and Senate Bill 1050 will expand that exception to prohibit aborting a child solely due to a prenatal diagnosis of Down syndrome.

According to Eric Failing, director of the PCC’s Social Concerns Department, the legislation, if passed, could save between 133 to 179 Down syndrome children per year in Pennsylvania.

Patrice Swick, director of the Office of Social Justice and Life, and Michele Inter, director of Disabilities Ministries, attended a Life Worth Living event March 12 in Harrisburg. Along with other proponents of the legislation, they met with legislators and talked with many families affected by Down syndrome.

Among those in attendance was Karen Gaffney, the president of a non-profit foundation and the first person with Down syndrome to swim the English Channel.

“For me, this was incredibly important to be present at the rally and witness all of the beautiful families and diverse organizations coming together to support such an important cause,” Swick said.

According to Swick, the rally served as “a launching point.” She encourages people to call and visit their state legislators, asking them to support the legislation.

For more information about the bill and proposed action, go to www.pacatholic.org. 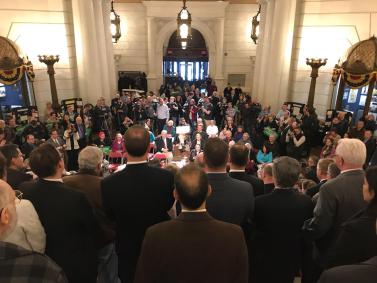 This was the scene at the state capitol in Harrisburg on March 12.