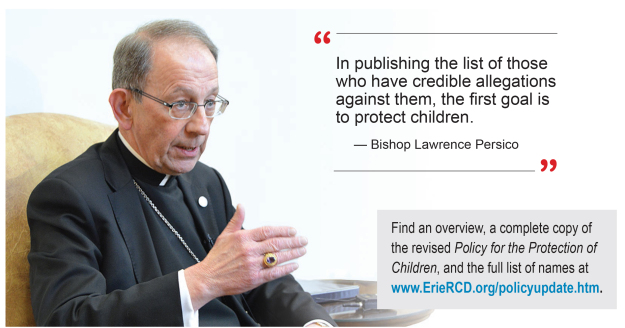 The Diocese of Erie—as part of a sweeping update to its Policy for the Protection of Children—announced on April 6 the names of 34 priests and 17 lay men and women who have been credibly accused of actions which disqualify them from working with children and youth. These actions range from the use of child pornography to sexual assault of minors.

These offenses were committed in the northwest Pennsylvania diocese dating back as far as 1944. Twenty-one of the named priests and two of the named lay people are deceased.

By releasing the names of those accused, the diocese becomes one of only about 30 Catholic dioceses in the country that have published the names of priests accused of abuse. Even rarer is Bishop Lawrence Persico’s decision to release the names of credibly accused lay people who have worked in some capacity for parishes, schools, agencies, or for the diocese itself.

[Find an overview, a complete copy of the revised Policy for the Protection of Children, and the full list of names at https://www.eriercd.org/childprotection/policyupdatenotice.html.]

“I want to express my sincere sorrow for the sexual abuse that has occurred within the church, particularly here in the Diocese of Erie,” Bishop Lawrence Persico said at a news conference April 6 at St. Mark Catholic Center. “I have met with victims and listened to the pain they and their loved ones experienced.”

Installed as bishop of the Diocese of Erie in 2012, Bishop Persico said offenses against children are “appalling,” but are even more heinous when committed by those in a position of trust.

“In publishing the list of those who have credible allegations against them, the first goal is to protect children,” Bishop Persico said, adding, “It is not possible for us to monitor all the people on the list. This is an important step in helping the public become aware of information that is important for the community’s well-being.”

He also said it was vital to publish the names “in the hope of helping the victims/survivors move one step closer to healing. It is important they know they are not alone.”

The revisions to the Policy for the Protection of Children is one of the most significant changes to the diocesan policy since it was promulgated in 1986. Never before has the diocese released a list of credibly accused priests or lay people. The decision to do so comes at a time of increased transparency under Bishop Persico’s leadership and in the wake of a Pennsylvania grand jury investigation that began in 2016.

A grand jury is a panel of individuals brought together to hear evidence of alleged crimes and consider suspects brought to their attention by a state or federal prosecutor. In Pennsylvania, the state Attorney General’s Office is using the grand jury to investigate the handling of abuse cases in Erie and five other Catholic dioceses in the commonwealth.

Since it was subpoenaed with the other dioceses in September 2016, Erie has provided all its related files to the grand jury.

“With the help of outside lawyers and investigators, we have reviewed any files we could find that had anything to do with inappropriate behavior by people—both clergy and lay—working for the diocese itself, as well as any Catholic school or agency in the diocese between 1947 and 2018,” Bishop Persico said.

One case went as far back as 1944. The list of names includes the late Bishop Alfred M. Watson, who is credibly alleged to have received a report about the suspected sexual abuse of a minor but failed to act on that report.

The nearly two-year investigation, according to Bishop Persico, provided the diocese with an opportunity “to intensify the efforts we had begun making to gain a fuller understanding of our past.”

The grand jury is expected to release its report on all six dioceses sometime this year. That report, if it is anything like the 147-page document released in 2016 on the Diocese of Altoona-Johnstown, will name people credibly accused of committing abuse or covering it up.

On the web page of the updated Policy for the Protection of Children, the Diocese of Erie apologizes for past abuse by priests and others. But it acknowledges that “apologies…are not enough.” The significant revisions to its policy are part of a comprehensive response to the situation.

According to the policy page, “The Diocese of Erie is committed to regaining the trust of not only its parishioners but of all people.”

For more than a year, the diocese has worked with the Pittsburgh-based law firm K&L Gates to cooperate with the Attorney General’s Office and to update the diocesan Policy for the Protection of Children and Youth.

According to the bishop, the revised policy (https://www.eriercd.org/childprotection/) is among the most comprehensive in the nation. It is part of a larger effort to ensure child protection.

Since the 1980s, the Diocese of Erie has been developing policies, procedures and training programs regarding the protection of minors. It regularly works with law enforcement, medical experts, compliance experts and members of academia to ensure that it maintains a safe environment for children and other vulnerable populations.

But, in recent months, members of the bishop’s staff and administration, the Presbyteral Council and the Diocesan Review Board all have collaborated to review the revised policy and give their full support.


Msgr. Edward Lohse, vicar general and director of the Office for the Protection of Children and Youth, explained that schools principals and Catholic-affiliated agencies in the diocese will have to be in-serviced on the policy changes, which go into effect July 1, 2018.

In an effort to further secure children’s safety, all employees of parishes, schools, agencies, and of the diocese itself must agree to cooperate with child abuse investigations when necessary.

“All of these changes constitute one of the most significant updates to the child protection policy of our diocese,” Msgr. Lohse said. “It is proactive rather than reactive.”

Concern for victims is the priority

Even before the grand jury investigation commenced two years ago, Bishop Persico maintained a transparent posture in the face of child abuse cases. Early in his tenure as bishop, he invited Erie County District Attorney Jack Daneri to review the diocese’s files to determine whether accused priests could still be prosecuted under the statute of limitations.

But that was short-lived once the grand jury was empaneled.

Still, Bishop Persico has committed to releasing the names of priests and lay persons whom the diocese believes are disqualified by their actions—or sometimes by their inaction—to work with children.

“As Catholics, we believe the Lord has infinite mercy and absolution for those who are contrite and sincerely seek forgiveness,” Bishop Persico said. “But that does not mean they are free from the ramifications of their behavior.”

Pastoral care and compassion for victims, as well as the protection of children and vulnerable adults, is a top priority of the Diocese of Erie. The diocese encourages anyone who has experienced sexual abuse or misconduct by a member of the clergy or any employee or volunteer of the church to contact law enforcement. To report abuse to the independent investigators retained by the Diocese of Erie, email ErieRCD@KLGates.com. In addition, victims or concerned individuals can report abuse to ChildLine, an outreach of the Pennsylvania Department of Human Services, by calling 800-932-0313. The line is open 24/7, and callers may choose to remain anonymous. Victims also are welcome to contact the diocese directly to report abuse at 814-451-1543. Counseling assistance is available for victims and/or their families through the diocesan victim assistance coordinator, Dr. Robert Nelsen, who can be reached at 814-451-1521.