The statistic—while disturbing—is not surprising when considered alongside national figures showing that an estimated 64,000 people per year die from drug overdoses in the United States. Yet this eastside parish of 1,000 families has found itself in the crosshairs of the national opioid epidemic. Nearly all of the 10 funerals at St. James have involved inactive parishioners or someone who has a connection to families of parishioners.

Each death is a moment in which a pastor is called to be a compassionate shepherd. 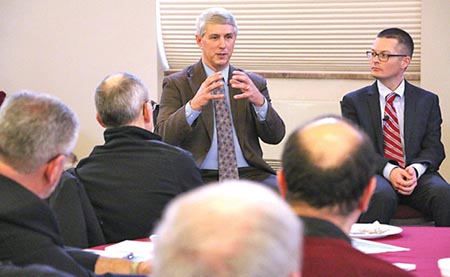 “Anytime these events happen, I never preach from the pulpit,” Father McCormick said. “I always come down to the parents and say, ‘You are not responsible for this. This is a choice—although a bad one—that your loved one made. You cannot feel guilty about this.”

As a pastor, Father McCormick knows he must help families comprehend the misunderstood nature of the epidemic: addiction. Narcotics, particularly heroin, are highly addictive and can be mentally and physical difficult to confront and overcome.

As a member of the newly created Opioid Task Force of the Diocese of Erie, Father McCormick was happy to be part of a recent effort to inform clergy about the growing epidemic. On Feb. 22, the task force presented a panel discussion and resources to dozens of clergy who gathered in the Yehl Ballrooom at Gannon University in downtown Erie.

Under the direction of Ann Badach, executive director of Catholic Charities of the Diocese of Erie, the task force offered practical and community-specific information regarding the reality of the opioid crisis. Introduced by Bishop Lawrence Persico, task force members offered their expertise in various areas, including drug and alcohol counseling, worship and education. There was a panel discussion, too, which included the perspective of diocesan priests Father John Jacquel, pastor of St. John the Baptist and Holy Rosary parishes, both in Erie, and Father Ross Miceli, pastor of St. Boniface Parish, Kersey, and campus minister for the Elk County Catholic School System.

“We all felt on the task force that our hearts were open to the Holy Spirit and we were able to make, hopefully, a significant contribution to the spiritual life of the Diocese of Erie,” Badach said. “It was powerful work, good w

Each priest in attendance at the February meeting was encouraged to share specially prepared prayer resources and other information with parishioners affected by the opioid epidemic. Another idea is for parishes to consider establishing parish action teams to explore ways to respond to the opioid crisis.

Father McCormick said he already has shared some of those newly developed resources with two families whose child and grandchild are addicted. He also will continue to offer a Mass held at St. James every Sept. 14 for those suffering from addiction and their families.

“I think people understand that the bishop and the diocese recognize this crisis,” Father McCormick said. “We can’t do a lot to end it, but we can certainly do a lot to bring comfort and healing to those affected.”