‘God still has a presence in this…’ Students, bishops stand against gun violence 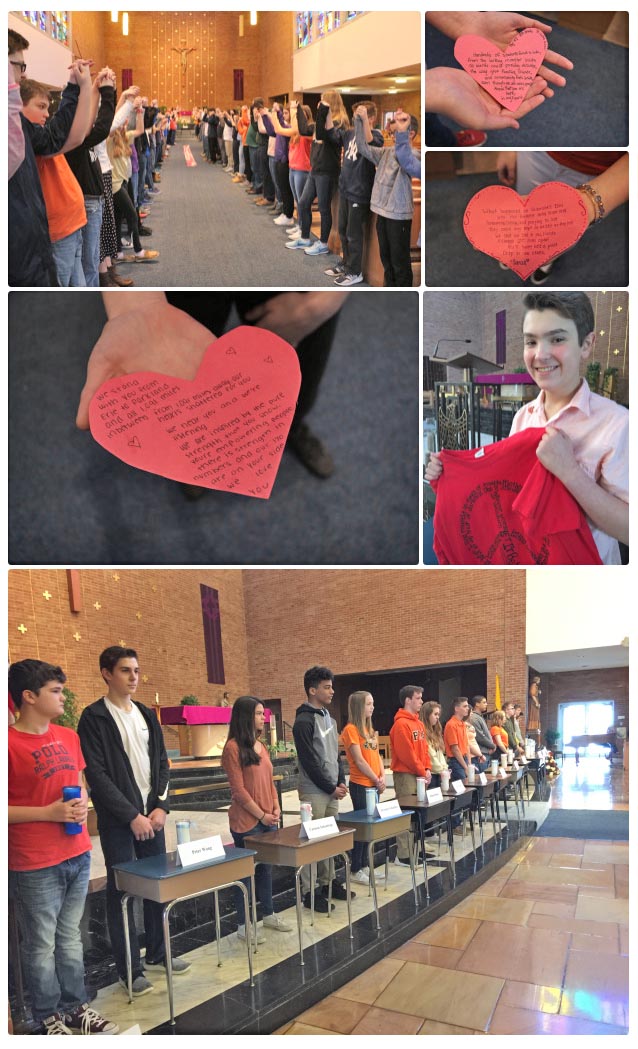 Sixth-, seventh- and eighth-graders at St. Luke School, inspired by an idea from student A.J. Reitz, held a prayer service Wednesday to remember the 17 victims of the recent school shooting in Florida.


Fourteen-year-old A.J. Reitz of Erie wanted to do more than walk out of school in order to remember the victims of last month’s mass shooting at Marjory Stoneman Douglas High School in Parkland, Fla.

An eighth-grader at St. Luke School in Erie, Reitz had heard through social media that teen-age students throughout the country would be participating in the March 14 National School Walkout.

“I talked to my mom about it and I was thinking about it and wondered, ‘Is there a way to put a positive spin on this?’ Reitz said. “She told me to pray on it and that’s when I thought of a prayer service at church. It’s more of a walk-in to pray to God for the souls of the people who are, unfortunately, not with us anymore.”

A teen-ager like many of the 17 victims in Florida, Reitz felt the deep pain of yet another school shooting, a common occurrence in his young lifetime.

“It is to come together with the community, with the country and say, ‘God still has a presence in this and we can do something before more violence happens again,” Reitz said.

He worked with Principal Julia Strzalka and other staff members to organize a morning service that included placing 17 empty desks near the altar, with the name of each victim. Seventeen eighth-graders carried white candles that were placed on each desk.

Father John Malthaner, pastor, offered a blessing and prayer and then, as each victim’s name was read, a St. Luke student lit a candle on the appropriate desk.

A poem written by one of the victims before his death also was read. Following silent prayer and music, all students came to the center of the church, holding hands and then raising them to the sky in solidarity.

The moment brought tears to the eyes of many in attendance. For Reitz, it was a moment he’ll always remember.

Strzalka said the prayer service involved 170 of the school’s sixth-, seventh- and eighth-graders. Younger students were not included in the service due to the sensitive nature of the violence.

“Knowing that we pray together will show that there is a brighter future for our country,” Strzalka said. “It will give the students strength.”

On March 13, students at St. Joseph School in Lucinda participated in a morning Mass dedicated to victims and survivors of school violence.

“We selected the theme of the Mass as “be at peace with everyone,” said Betsy Ochs, principal of St. Joseph.

The Florida massacre, the deadliest recorded high school shooting in America, has prompted young people throughout the country to advocate for stricter gun-control laws and more mental health resources.

Youth activists also have organized a March 24 March for Our Lives rally in Washington, D.C.

The chairpersons of two U.S. bishops’ committees said it is long past time for the nation’s leaders to come up with “common-sense gun measures as part of a comprehensive approach to the reduction of violence in society and the protection of life.”

The U.S. Catholic bishops have advocated for such meaasures for decades and will continue to do so, said Bishop Frank J. Dewane of Venice, Fla., chairman of the U.S. Conference of Catholic Bishops’ Committee on Domestic Justice and Human Development, and Bishop George V. Murry of Youngstown, Ohio, chairman of the Committee on Catholic Education.

In the aftermath of the Feb. 14 massacre, the bishops in a joint statement March 5 said the moment “calls for an honest and practical dialogue around a series of concrete proposals—not partisanship and overheated rhetoric.”

Bishops Dewane and Murry rejected the idea of arming teachers, as President Donald Trump and others have suggested as one possible solution. This “seems to raise more concerns than it addresses,” the prelates said.

Bishops Dewane and Murry noted that for many years, the USCCB has supported several measures to reduce gun violence.

They also lauded the reform efforts of the Florida shooting survivors and other young people around the country, calling their actions “a stark reminder that guns pose an enormous danger to the innocent when they fall into the wrong hands.”

“The voices of these advocates should ring in our ears as they describe the peaceful future to which they aspire,” Bishops Dewane and Murry said. “We must always remember what is at stake as we take actions to safeguard our communities and honor human life. In the words of St. John, ‘Let us love not in word or speech but in deed and truth.’”