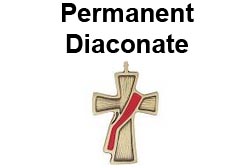 
In these presentations Deacon Shewman examines spirituality as understood by permanent deacons and their wives and concentrates on these five core areas characteristics of the spiritual lives of deacons:

Deacon Shewman was ordained to the permanent Diaconate on September 24, 1984 for the Diocese of Agaña, Guam (Mariana Islands). Six months after his ordination the Diocese was split and he was assigned to the newly created Diocese of Chalan Kanoa (Northern Mariana Islands), where he ministered until November 1997. Since then Deacon Shewman has ministered in the Diocese of Erie.  He has served in a wide variety of ministries. While in the islands he served as Diocesan Chancellor, Tribunal Judge and as Director of the Deacon Formation program, among others.  With the Diocese of Erie he serves as a Tribunal Judge, an adjunct professor with the Master of Pastoral Studies program at Gannon University and he is assigned currently for pastoral ministry as a deacon at St. Luke Church in Erie, PA.  Deacon Shewman has a number of academic and professional degrees, including the Licentiate in Canon Law from Catholic University of America (JCL-1995) and a Doctor of Ministry (D.Min.--2005) from St. Mary Seminary, Cleveland.